Lexi Bella works in paint, collage, and installation. Jumping into her world is like jumping into a vat of raspberry lipgloss. Through her paintings, collages, and installations she explores the modern day love/hate relationship with beauty and pop culture, models and monsters, sex, desire, disgust, and the body. Her faces confront, seduce, and unnerve creating an immediate reaction and therefore relationship with the viewer. She is a modern feminist, sexist, and artist. 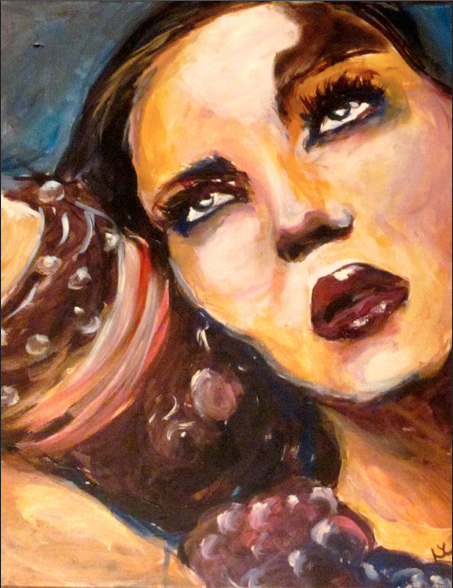 Lexi Bella lives in New York City’s Lower East Side. She has been painting and creating art for over 25 years and completed her MFA from the Pennsylvania Academy of Fine Arts in Philadelphia in 2006. She has participated in Art Battles since 2009, the Premier International Live Art Competition for Street Artists & Fine Artists. In 2010 she won her first Art Battle at the Brooklyn Museum of Art, and in 2011 she traveled to Verbier, Switzerland to Battle, and this past September Bella won the 2012 Art Battle International Championships in Paris, France and became the 2012 American ArtBattles Champion.

In 2012 Bella completed a series of spray murals all over New York, most notibly at Legendary Graffiti “Museum” 5 Pointz, as well as the Centre-Fuge Public Art Project in the Lower East Side. In 2013 she was featured painting live at the Fountain Art Fair during Armory week for the Canada based EnMasse Project. In May she was also commissioned to come do a 12ft high mural at UpFest in Bristol, UK for Europe’s Largest Urban Art Festival.

The second half of 2013 will find Lexi Bella doing a series of large spray pieces in NYC, Brooklyn, San Francisco, & LA and anywhere else she can find wall. Lexi Bella is scheduled as participate in shows in Brooklyn & San Francisco & a solo show in Chelsea is planned for early 2014.

FOR MORE INFOMATION ON LEXI BELLA CHECK OUT HER WEBSITE lexibella.com