Five for Finding: The Transitional Camouflage

The closest I’ve been to a resort was as a tween–a Pacific Island-themed Disney hotel. At dinner, I thought the ketchup tasted funny, but my parents felt it befit a restaurant with hula-skirted idols. Chip and Dale signed autographs at our table. We went back to our room. I threw up over a balcony. Mickey would have disapproved.

Perhaps I’m not winter vacation material, but about now, brands seemingly want me to be. “Resort Collection” signs pop up in stores and on websites that, at the same time, scream the bloody murder of an after Christmas sale. Retailers need to balance losses from such discounts with early selling of Spring merchandise. High tier or low, most no longer believe the phrase “New Arrivals” is cutting it.

Resort–as a season–stems from luxury companies with clientele wealthy enough to book lavish year-end escapes, but it’s not as though there aren’t mass market parallels. The term resonates at both levels because our minds wander down the optimistic path of transition–consideration of how one period’s end impacts what we wish to change as another begins. Visions of Jamaica, planned in Jamaica Plains.

Often, I think the nuance of transition is lost on product line designers who live in the capsule of quarterly business cycles, challenged to provide something new, but different, but statement-y every three months. A February thru April in off-white/light blue/dusty brown abruptly turns to a peacock pattern in purple/tangerine/turquoise on May 1. It’s silly. (I participated in it when asked, but it was no less silly).

So over the past two weeks, I’ve been encouraged by one of the most creative examples of “inspiration carryover” from the least likely source: camouflage. Unlike animal prints, camo has definitive on- and off-years. (Some say it’s tied to shifts in mood about world affairs and war. Sure–why not)? And we’re exiting a fall in which military elements made a strong presence.

Traditional drab green camo doesn’t have stand-out success past November, but instead of dropping the element, designers are taking innovative approaches to link what arrived two months back with what’s likely to come next. This isn’t everyone jumping on an identical “Let’s all do camouflage in blue!” strategy; the breadth of variety in these treatments suggests to me it’s more about individual brands utilizing a shared trend as each transitions to its own vision of spring style.These are five transitional camouflage bags for finding: 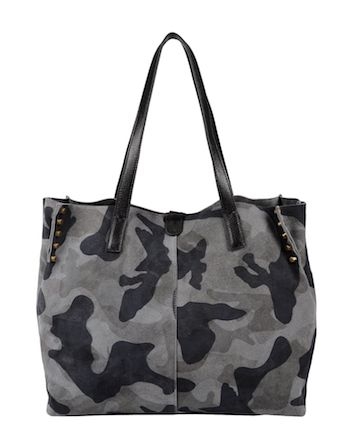