Five for Finding: The Dark Iridescent

The formula was simple; swords and ‘splosions for boys (He-Man and G.I.Joe), color and candy for girls (Rainbow Brite and Strawberry Shortcake). The Smurfs was an epic feat of gender-neutral television. (Not Care Bears. Get real).

Even though it’s contrary to our current expectations of cartoon subject matter, I don’t fault programmers who, back then, could never have predicted the cultural shifts that shaped our attitudes since. But I do fault them for one thing: the extraordinary feat of superhero sexism that was Jem.

With tap of her earrings, mild-mannered Jerrica Benton transformed into a wildly popular singer (the aforementioned Jem) whose superpower was pretty much…to be a singer. Also, maybe she was invisible–I’m not sure it mattered. The name of her group, The Holograms, adds to the invisibility theory, though personally, I never got past the earrings bit.

Holograms are–in really, really incomplete terms–kind of like 3-D, rainbow-colored pics on silver paper; stare at one from different positions, and the image’s depth appears to change. Yes, it’s kind of how Tupac got on stage with Snoop at Coachella last year, except totally not exactly.

This fusion of metallics with rainbow has picked up steam going into New Year’s; it’s a way of introducing shine without resorting to sequins. Holographic fabrics–no longer restricted to silver–appear in all manner of bag silhouettes, hitting our eyes with a full array of primary and secondary hues. This coincides with an expanded use of iridescent coatings which give off an “oil slick” appearance–it’s a related idea, though the breadth of shine is more limited, dominated by purples and greens.

Fun? Yes, but a novelty. And novelty bags have limited life cycles, even when the base material is black. Much like Jem, it’s worth remembering that visual effects (color shifts, transparency, even invisibility) may make for short-term enjoyment, but the aftereffects may be utterly forgettable.

These are five dark iridescent bags for finding: 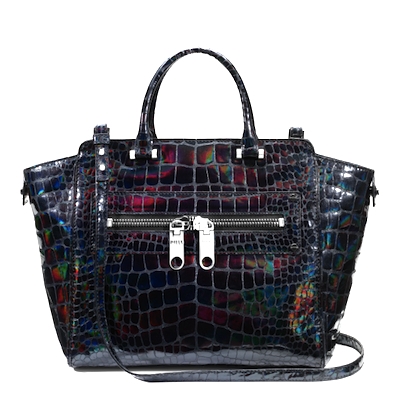